Posted by Press Officer on 06 November 2015 in News

Just over 160 crews competed on the River Dee in Chester when The Dee Autumn head race took place on Saturday 31st October 2015.

Run from the A55 road bridge to the end of The Meadows,a distance of 4200 metres,and hosted by Grosvenor Rowing Club, Chester, this race is a popular early season choice for many crews from all over the North West.

Grosvenor stormed to victory in 9 of the categories,but special mention should be made of the Novice Men's squad of Sam Larby,Tom Balicki, Adam Tilston, Juan Herran-Alonso, Richard Ives, Carl Zolman, Ross Wilkins, Hywell Griffiths, Steve Holdsworth, Ben Whyman coxed by Gemma O'Connor.  Two weeks after winning both Novice coxed 4's and Novice 8's in Manchester at Agecroft Head, did exactly the same on their home river, beating crews from Salford, Sheffield Universities, and Kings School  in the excellent time of 13.48 minutes.

The Masters Quad of Tim Howe, Brian Chapman, Mark Tilston and Mike Allwood were the stand out veteran performers completing the course in 13.56mins, beating the other Master winners of Masters E Quad (14.12) and a Masters D coxed Four (15.10) whilst Di Moore won the Women's Master's single scull event in 16.46

Race results can be found HERE
If you would like to try your hand at rowing please contact Grosvenor Rowing Club, Chester on their web site or by ringing Chris on 07970950704 and enrol on our Learn to Row Course 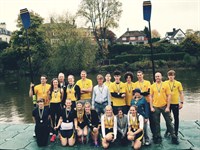